Under my bed there is a box. It is full of black and white and sepia photographs. It is my family pictorial archive.

I don’t look in it often, but, when I do, I turn them over in my hands carefully, for they are like old friends. All of them are dead now, of course, and most of them I never knew, or even met, personally, but in some strange way they feel known to me, open and strangely readable . . . they are, literally, familiar.

In some important way it is different from the photos we take today.

There are technical reasons for this difference, of course. The long exposure times of early photography precluded action of any kind. Even smiling was difficult, as everyone who has experienced the excruciating difficulty of holding a smile for several minutes will testify.

After ten seconds it has become a grimace of embarrassment, not the universal sign of pleasure that the photographer and you wanted.

But the important thing about these photographs is inherent in the fact that I can put all the photos, covering more than a hundred years, in a single shoebox. It is their relative rarity that makes the images special.#

I don’t mean that so few have survived that they are like fish in the sea. No, they were rare in their own time, as well, and we probably still have most of them, even if many, perhaps most, are unidentified.

The selfie stick had not yet been invented . . .

Now we take hundreds of pictures a week. Here is a picture of me grinning somewhere. Can’t remember where it was. And here’s another picture of me with the same drunken grin in a really good place we went to in . . . oh, I’ve forgotten. What year was it? And her’s another grin, and another.

We are always grinning madly, as if we want to prove to ourselves, at some future date, that, yes, we really knew how to have a good time back then.

My grandparents didn’t take “snapshots” of their life together. There is no pictorial record of them drunk at someone’s party. Not even of their wedding day in faraway Droitwich.

So this is a one-off photograph of them as an elderly couple. It is their statement to the world and to the future. They are posing for a portrait, and would not dream of smiling or pulling a funny face, just as, with the exception of the Mona Lisa, people don’t smile in painted portraits.

They went to a studio in their best clothes, and composed themselves before a backdrop sky. This photograph was important. It was their statement to the future about who they were and where they had got to after a long life of hard work and prudence.

I can imagine how their voices would sound, how Jim would look at you sideways as though you were ten years old and been caught scrumping apples; and Lizzie would look at you straight and worried, as though it was a bit of a puzzle why you wanted to take the apples in the first place.

And this is, indeed, how they were. 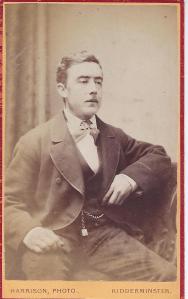 Here is another. His name was Sam He was a carpet weaver in Stourbridge. He wasn’t a big cheese . . . he was an honest working man with a skilled job.

This is the only photograph of him, for he died soon after. But he sat for his portrait, in a jacket of rough cloth and a watch chain across his waistcoat. It may not have had a watch on the end of it, but he was consciously using the chain to signal his ambition.

This is a portrait of a young man, who wishes to be respectable but is not completely sure how to do it, as yet.

And what do our photos say about us? Out of all the thousands of photos we have taken of our lives, how many will survive to be put in a shoebox by our great grandchildren?

When our computers are examined by our descendants, will they still have Windows XP (or whatever)? Will they bother to try to open files that no longer open? Or will they just hit Delete?

Maybe they will persevere, and drag out our Facebook pictures. What will they make of all those parties and holidays?

The portrait photograph is no longer a gift to the future, a rare and rather precious communication to the next generation. Like most aspects of our culture, it has become trivialized, throwaway and totally forgettable.

4 Responses to Portraits and Selfies